Alternative Investments (AI) are innovative investment strategies and concepts that lead to a better diversification and optimization of the risk-return structure. These investments include asset classes like Private Equity, Private Debt, Infrastructure, Hedge Funds, Real Estates and Commodities. Alongside their illiquidity, AI stand out, among others, due to an above average return potential. A smart addition of AIs can lead to a higher efficiency of the portfolio. Thus, the volatility can be reduced without giving up expected returns. Especially in the Anglo-Saxon area, AIs are very popular. Since a couple of years, these investments becomes quite popular in Europe as well. Living in a time with low returns on traditional assets like treasuries, AIs offer an exciting opportunity for the own portfolio.

Primaries are an investment strategy rather than an asset class. Primary funds are all kind of funds that have not had their final closing yet. Typically, these funds have none or few investments made by the time an investor commits capital to the fund. Thus, the investor has no clear picture about the investments which the fund plans to do. Once the fund has its final closing it becomes a secondary.

Secondaries per se are not an own asset class but a strategy. If an investor wants to sell her investment, this becomes a secondary. Thereby the buyer also acquires potential outstanding commitments of the seller. Secondaries can be found in many fields of alternative investments like Private Equity, Private Debt, Infrastructure or Real Estates.

Since the underlying assets are quite illiquid, it becomes challenging to sell the investment once it is bought. That is why they are often sold with a discount. The advantage of buying a secondary is that one enters into an already invested fund. Thus, one gets a good overview about the investments in the fund. Moreover, since the fund is already invested there is none or little of a j-curve effect. Hence, secondaries produce cash-flows right from the beginning and are an interesting vehicle to place into a primary-portfolio to diminish the portfolios underlying j-curve effect.

There can be multiple reasons why an investor is selling its investment. First and for all, one should not think that secondaries are the “bad” assets an investor wants to dump. For the most part it is simply because the investor wants to change its strategy or needs money on short notice. 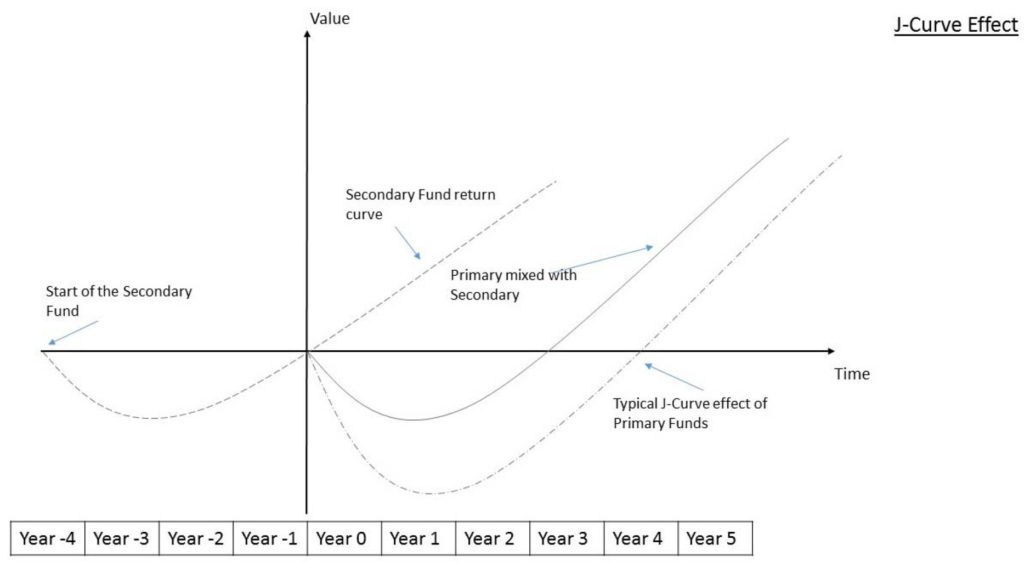 In contrast to a simple commitment to the fund, the co-investor gets more transparency and control about the investment. Moreover, she gets presented a couple of deals and thus can save on its own deal sourcing. In addition, the fees are typically lower when an investor becomes a co-investor. The advantage for the GP is that she can realize deals that she could not realize with the fund alone. Such deals can also help to improve the relationship between the LP and GP, which can be helpful for future investments.

According to a survey by Preqin in 2014, around 52% of LPs who were asked about their performance of their co-investments answered, that these investments performed significantly better than their normal fund investments.